Musings from the Museum 20

Musings from the Museum 20

The name Spalding is first recorded in Domesday Book (DB) in 1086 as Spallinge. During the next couple of centuries it was variously recorded as Spaldingis, Spaldinges, Spalingisand Spallinges. Few have doubted that the present-day name of the town is related in some way to that of a group called the Spalda mentioned in an early tribute list known as the Tribal Hidage. But the relationship between the two may not be as straightforward as is sometimes assumed.

The groups listed in the Hidage occupied lands which were within, or owed tribute to, the Kingdom of Mercia. It seems to reflect a relatively early stage of organisation around the time of the Heptarchy, probably in the late 7th or early 8th century, and certainly before the Viking invasions, although it is only preserved in much later manuscripts from the 11th century onwards, presumably out of antiquarian interest. The groups are listed in broadly clockwise order starting in the north-west, and following the logic of this order the Spalda would have occupied an area some way to the south of Spalding. There is a related place-name, Spaldwick, in Huntingdonshire, but others occur in Nottinghamshire (Spalford) and the East Riding of Yorkshire (Spalding Moor and Spaldington). How could one otherwise obscure group of people have made an impression over such a wide area?

If we allow our imagination to run, we can visualise a single clan group setting out on the perilous voyage from present-day Holland, Germany or Denmark, across the North Sea towards the east coast of England where they are looking for a better life in a more fertile land. They have set sail in a flotilla of small boats, trusting to the god Thunor to grant them safe passage without adverse weather, but nearing the coast of Lindsey they hit a storm. The boats lose contact with one another, and each makes for the nearest safe haven it can find. One group eventually reaches the Wash, and heads upstream along the Welland and the Great Ouse. The other is driven north and finds safety in the mouth of the Humber, from where the boats make their way inland and up the Ouse into the heart of Yorkshire, or along the Trent into present-day Nottinghamshire.

But as committed seekers after truth, let’s consider the hard evidence. In the Hidage, the Spalda are assessed as being in possession of 600 hides, a hide being traditionally the amount of land needed to support a peasant family. The area of a hide would naturally vary according to the productivity of the land, and the figures given in the Tribal Hidage appear to be indicative of status, rather than the product of accurate surveying. The Kingdom of the West Saxons, by contrast, was reckoned at 100,000 hides. The Spalda are never heard of again, and were not destined to leave their mark on early medieval history. What can we say, then, about the origin of their name?

Spalding and Spaldington both incorporate the plural suffix –inga or -ingas, which in early usage generally seems to indicate ‘people of’, ‘followers of’ or ‘descendants of’. It is often found in conjunction with a personal name as first element, although in this case no such personal name is known from the Germanic world. But two of the place-names we have mentioned, Spaldwick and Spalford, do not follow this pattern. Spaldwick is first recorded in DB as Spalduice, with other early forms such as Spaldewic and Spaldewik. Spalford in DB is Spaldesforde. In both cases the first element seems to have had the suffix –es, which is genitive singular and therefore cannot be from the plural tribal name Spalda, a point which does not seem to have been widely registered by place-name scholars. In these cases we must look for another meaning, and we must consider that these may be derived from spald as a topographical term, rather than having anything to do with the tribal name, even though Spaldwick is suggestively close to the implied location of the Spalda in the Tribal Hidage.

Some of the references in the Tribal Hidage are suggestive not of tribes or clans, but descriptive names based on locations, for instance the Pecsaetna, ‘Peak-dwellers’, and the Wrocensaetna, ‘dwellers near the Wrekin’. In Old English, spald can mean either ‘spittle, spit’ or, by deduction from Old High German spalt, a ‘ditch, trench’. One of the greatest place-name scholars, Eilert Ekwall, suggested that spald could be used as the name of a stream or river, and believed that a lost river-name Spald may lie behind some of the names in this group. Spaldingas would then indicate ‘dwellers by the Spald’. Another group mentioned in the Hidage, the Gifla, were named from, or gave their name to, the River Ivel. The conjunction with ford in Spalford certainly indicates a riverine location. The Anglo-Saxons generally used topographical terms in a very precise way, so could we be dealing with a small number of settlements characterised by reference to a particular type of nearby water-course? Could the Spaldathemselves have taken their name from a river, or perhaps a canal, in their continental homeland?

We can probably take the evidence no further than this. It’s in the nature of place-name studies that searching for certainty often feels like grasping at smoke. But the quest for origins so often throws up new information in unexpected areas, and each new generation of scholars strives to consider the evidence afresh without the burden of old assumptions. And there’s always the remote chance that, somewhere in a dusty attic, lies a battered and forgotten manuscript … 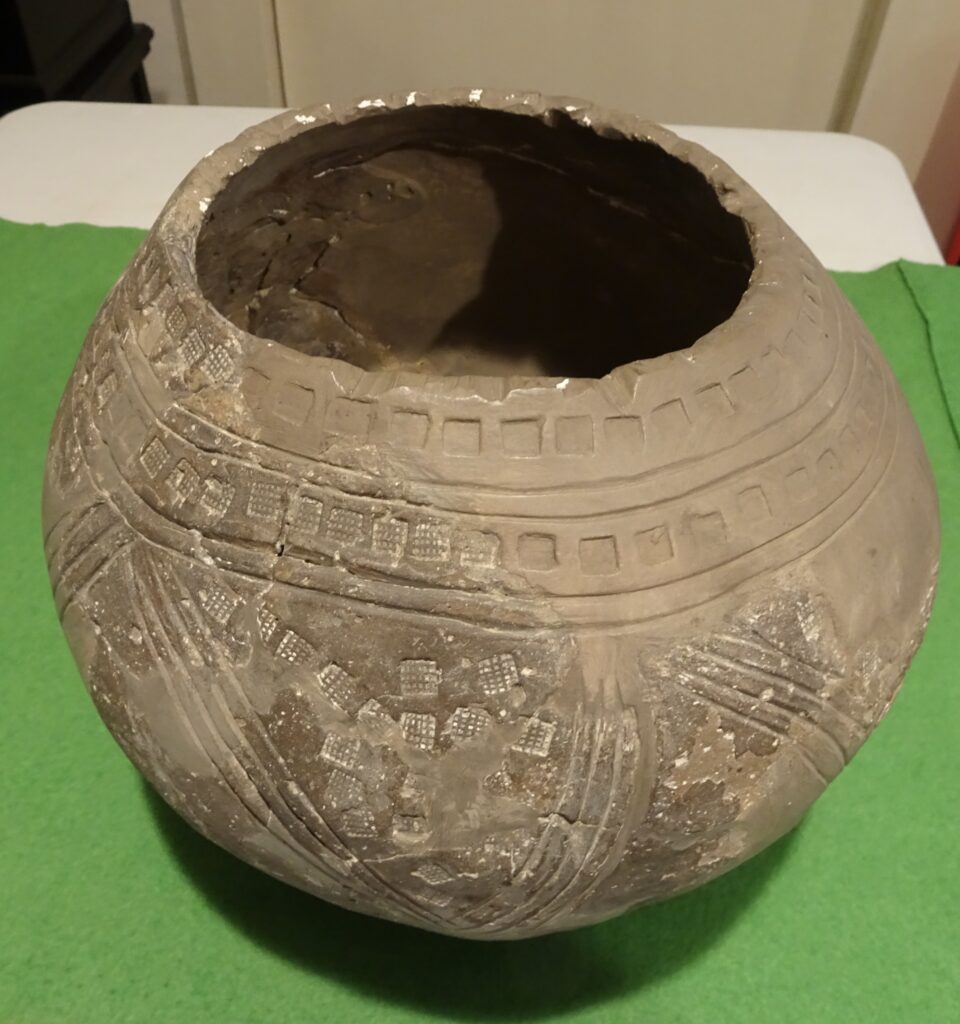 ‘Could this cremation urn have contained the remains of a member of the Spaldingas?’

The Voyage of HMS Beagle