The museum collection is, with the exception of the Ashmolean, the oldest in the United Kingdom. Some of the early museum specimens have vanished for, in the course of the centuries, the Society had many homes in various parts of the town before it built its present museum.

The museum contains, among other things, a rare specimen of James Christopher le Blon’s tapestry A head of Christ, presented by Sir Richard Manningham in 1732, and a fine astrolabe dated 1565 of Flemish workmanship, formerly in the possession of Sir Christopher Hatton (1540-1591), Lord Chancellor of Queen Elizabeth. 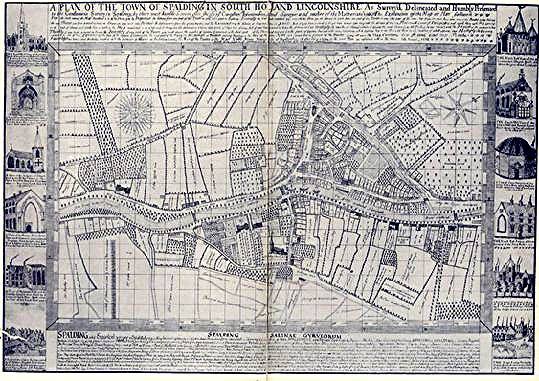 A map of Spalding executed for us in 1732 by John Grundy, a member, is in the Johnson Room. A 15th century missal, thought to be from the former Benedictine Priory at Spalding, a gift of the founder, and a beautiful 13th century illuminated manuscript Bible presented to us by Richard Collins, the miniature painter and an early member, are greatly prized.

In 1735 four great portfolios were filled with a collection of prints, drawings and plans, which are still carefully preserved. Among later acquisitions are the Charter of Deafforestation of lands in Spalding and Pinchbeck, a beautifully illuminated piece of work of the time of Henry IV, dated 15th October 1399, and the Wrest Park Cartulary of Croyland Abbey, written in the reigns of Edward III, Richard II and Henry IV. In the entrance hall is a very fine marble relief of Sir Isaac Newton by the Flemish sculptor, Laurent Delvaux (1696-1778) who lived in London in the early 18th century where he executed works in bronze and marble for Westminster Abbey. Local items too are well represented.

The Bailey Room recalls the long and valued service rendered by George W. Bailey, for many years Curator and Secretary. It contains examples of his work in oil and water colours. A portrait of George Bailey, by local artist Rex Pitts, also hangs in this room.

To contact the curators, please email us at curator@sgsoc.org.