Our 2020 AGM was held on Wednesday 30th September. It was a closed meeting organised under the emergency arrangements allowed during the pandemic.

The President and Secretary were present and the quorum was made up of proxies submitted by the membership.

We are very grateful to the 107 members who sent in proxy forms either by post or electronic means.

All resolutions were passed.

In the letter that accompanied the AGM Notice we did ask members to raise any questions they might wish to bring up.

Q. The March Newsletter raised serious concerns about the central heating system. What has been the outcome?

A. At the time of the March Newsletter there were suggestions that the central heating system had a leak. If true this could have been serious and potentially expensive to correct. In the event it turned out there was no leak and our central heating engineer is now satisfied with the integrity of the system.

Q. The March newsletter also noted that negotiations for expansion next door had reached an impasse, raising the question about continued occupation of the present building. The September Newsletter mentions the acquisition of some off-site storage space and the re-organisation of displays. What plans are being considered/implemented for the long term future of the Society and the financial means by which this could be funded?

A. Council continues to investigate all possible solutions to our problems. The Society needs more exhibition space, and we continue to seek either an extension to our present building or a suitable alternative. It is clear that we do not have funding in hand for either solution. We are actively seeking grant funding, but do not expect this to be easy to obtain. As the recent newsletter mentioned we are pursuing the possibility of off-site storage for both library and artifacts. We have received funding from Historic England for a major structural survey of the Museum. The report is due in November. We will endeavour to keep members informed of this and other developments. 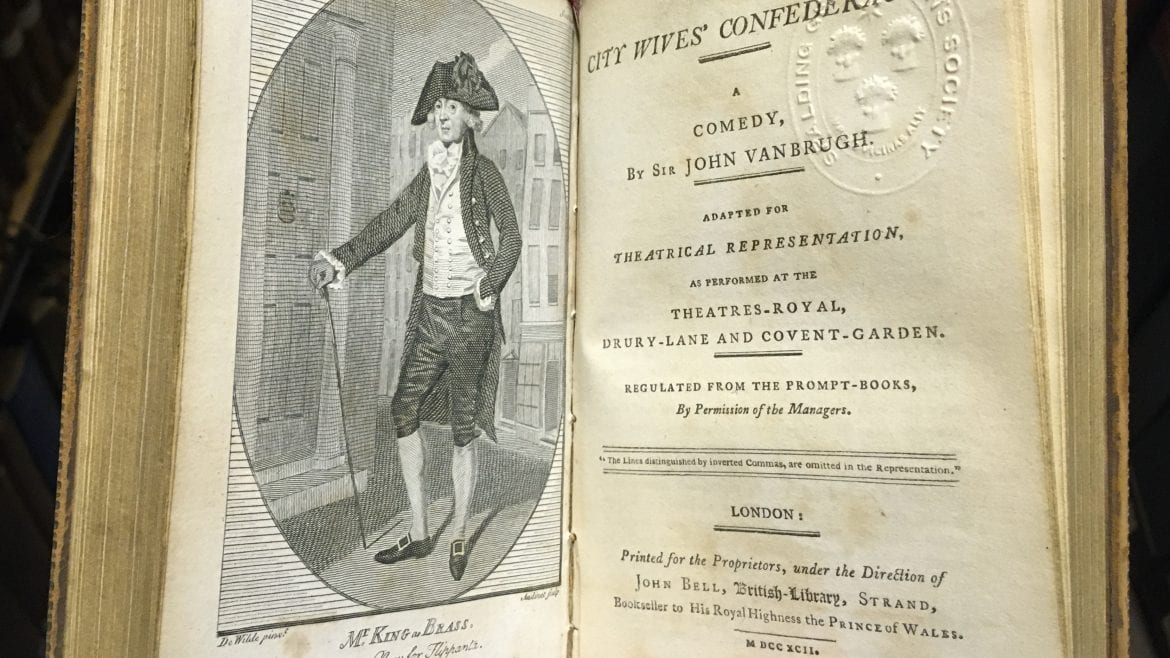 Musings from the Museum #1

[This post is part of a new series of ‘Musings from the Museum’ written by Society members, volunteers and friends. If you would like to contribute, please email outreach@sgsoc.org.]

I have been fascinated by The Spalding Gentlemen’s Society since I was young and first noticed the stuffed birds in Ayscoughfee Hall where I went for dance classes.

When I got the opportunity to join I was delighted, however filling in the entry form was a bit of a challenge.

What did I have to offer the Society?

Apart from being a bit of a medieval nut, I decided that as an erstwhile acting coach I could probably draw on my wardrobe mistressing skills to help with textiles, and as a mother I could cater. I have never had a problem with talking to people so stewarding was a possibility too.

So far I have stewarded in a minor capacity, helped catalogue the costume collection and baked a cake.

But then I struck gold!

One day Dustin, our librarian approached me. With my literacy and local background would I be interested in joining his work party to learn to care for books and catalogue the Society’s papers? Would I ever!

I have learned about cleaning and storing books, even going to a workshop at Cranwell R.A.F. College which I have always wanted to visit. I have perused the very C18 newspapers that Maurice Johnson himself annotated for meetings and I have studied old photographs that take me back to my childhood and beyond. At the same time I have made good friends with colleagues of like mind to me.

One particular job that Dustin gave me was to check the ‘Literature Stack’ in the library for condition and content. Several weeks of Tuesday mornings found me at the top of a ladder with pencil and paper and little soft brush (this was before the health and safety decree), checking each book. On one occasion, taking a break, I mentioned to Dustin that I had been working on some drama, quite a lot of it in fact, as when I thought I had finished a shelf there was another.

Dustin perked up “Is it a set?”

“It’s not Bell’s British Theatre is it?” 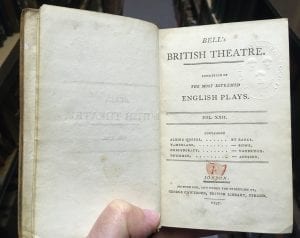 “I’ve been searching the catalogue for that and never found it, though I really hoped that we had one”.

(It was in the catalogue but under the first play in each volume, not as the set).

I gave him the date. 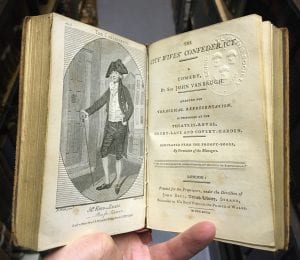 I gave him the number.

“That date of issue had that many volumes. I must see this”.

We repair to the library where Dustin gazes in awe.

I now feel that I may have something to offer the Society.

I know that the previous ‘General Knowledge’ quiz has only just finished but I thought, due to the Coronavirus and those Society members and your friends who are self isolating, or just spending much more time at home over the coming months, a new quiz would help pass the time.

It is a word quiz, based on the three letters ‘SGS’.

Please email quiz.sgs@gmail.com and you will be emailed the quiz and instructions, or download a copy from the following link: SGS Word Quiz  Please consider printing the pages back to back, to save paper, and in black & white to save ink.

You will also be able to purchase a copy from Bookmark in Spalding.

The closing date will be the 1st August 2020, so plenty of time to exercise those brain cells.

General Knowledge Quiz Results
Many thanks to all who took part in the latest Society quiz – the results are now in!
There were two people sharing first and second prize:
C Chantler from Bath
J Baker from Chesterfield
The £5 random prize was won by L Golding of Ashford.
A total of £242.50 was raised, which is a great achievement.
Cancellation of lecture https://www.sgsoc.org/wp-content/themes/blade/images/empty/thumbnail.jpg 150 150 Nick Casswell Nick Casswell https://secure.gravatar.com/avatar/39c0a59c673a9f610135f3eb537c7f59?s=96&d=mm&r=g

We regret that the final lecture of the season arranged for March 27th has been cancelled.

We will not be opening to the public on March 15th as we had planned due to the Coronavirus outbreak.

We have a particular problem with our restricted washroom facilities and are conscious of the need to keep our visitors and volunteers safe.

SGS Symposium: Vikings and Anglo-Saxons in Lincolnshire and the Fens

The Vikings and Anglo-Saxons in Lincolnshire and the Fens

Given the current government advice on the coronavirus pandemic, Spalding Gentlemen’s Society regret that we must postpone the symposium planned for 18th April 2020 in the Baptist Church Spalding. All payments received to date will be returned and we will contact you again when circumstances permit the event to be rearranged. Thank you for your support and we look forward to meeting you in the future.
https://www.sgsoc.org/sgs-symposium-vikings-and-anglo-saxons-in-lincolnshire-and-the-fens
Open Sunday https://www.sgsoc.org/wp-content/themes/blade/images/empty/thumbnail.jpg 150 150 Nick Casswell Nick Casswell https://secure.gravatar.com/avatar/39c0a59c673a9f610135f3eb537c7f59?s=96&d=mm&r=g

Our next Open Sunday is on February 16th.

The Broad Street Museum will be open from 2pm to 4pm.

All are welcome. There is no need to book or be part of an organised tour.

Take your time to look round our extraordinary range of local, exotic and curious collections.

The curator has put together a display case featuring ‘Crime and Punishment’.

Our friendly guides will try and answer any questions you may have and tell you more about the Society.

Hannah Saunders is an Artist, Medieval Art Historian, Creative Producer and Curator based in the Fenlands. Her work has been exhibited internationally, featured in publications including Dazed & Confused and Fotografia, and her first radio series Isle of Thorns was broadcast on BBC Cambridgeshire in 2019.  Her most recent work Allegorical or Historical, a series of self-portraits as Female Fenland Saints, will be exhibited at Peterborough Cathedral in March 2020. Her practice revolves around translating literary and historical themes into tangible works, with particular emphasis on advocacy and interpretation of women’s history, archives and folklore.

Hannah has received a Jerwood Bursary, enabling her to undertake her first artist residency at The Spalding Gentlemen’s Society. During her time here she will explore and research women’s participation in antiquarian circles, and contemporary perceptions of collecting and collections; creating a micro oral history archive over January 2020.

If you are interested in talking to Hannah and allowing her to record a short conversation about the themes of her research you can contact her via email at hannahlouisesaunders@gmail.com (Please pick a time within one of the slots outlined below)

Are you a member of the Spalding Gentlemen’s Society and want to discuss Women’s participation in Antiquarian Circles with Hannah? Pick a slot below.

Are you a member of the public and want to discuss Contemporary perceptions of Collecting and Collections? Pick a slot below.

SLOTS AVAILABLE FOR ORAL HISTORY INTERVIEWS (MEMBERS OF THE PUBLIC)

Next Open Sunday in February

We will be giving our hard working stewards a rest in January. Our next Open Sunday will be on February 16th.

More details will be posted towards the end of January.