Musings from the Museum 16

Musings from the medal department.

Of all the medals in the world the allied victory medal must surely be the most collected as the variants created, often in small numbers, combine to make a fantastic collection as very often there are many variants of a single medal found. I only intend this to be an introduction to the subject as Alexander Laslo has managed to fill a book on the whole subject. At the close of the great war at the Paris peace conference it was proposed by marshal Ferdinand Foch that the allied nations should issue a medal to commemorate the conclusion of hostilities. It was decided that each nation would make its own medals, and to avoid wholesale exchange as souvenirs between combatants, be similar with the wording appearing in the language of the issuing nation. The basic brief was as follows,

The ribbon would be of the double rainbow type with the red to the centre and colours merging to violet at the outer edges and be 39mm wide.

The medal would be a 36mm bronze disc with a winged figure of  victory on the obverse or the nations own interpretation of victory.

The reverse would have the wording “The great war for civilisation 1914-1919” or the national equivalent. National alms or symbols were permitted. 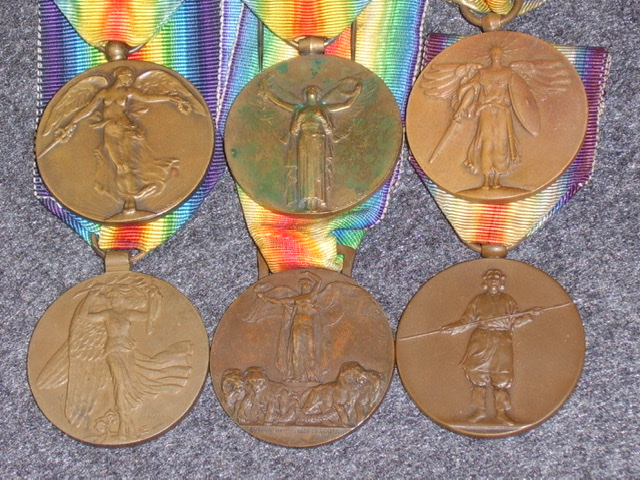 The British medal designed by William McMillan followed the brief with a very stylish winged victory on the obverse but with a fairly plain reverse with the stated wording within a wreath border. This same medal was also used for those who qualify for the award in the dominions. South Africa had a medal which differed from the British version in that the wording on the reverse was written in English and Dutch, approx 75 000 were issued and made at Woolwich arsenal. The British version was originally made in a dull bronze as are those of the other nations, however it has been reported that senior officers complained of this as it looked dirty against highly polished silver medals normally issued for gallantry and campaigns. The result was the medal was re-issued with a polished and lacquered finish with those having been given the dull versions able to exchange them for the lacquered example which most did but dull early issues are still found. Approx 5.75 million British victory medals were issued. These were made between Woolwich arsenal and Wright & son.  All British, dominion and South African examples are found with machine impressed naming of the person awarded around the circumference of the rim. A point to note is the dating of the British medal, although the war on the western front finished in 1918 certain operations carried out in Hedjaz and by the Aden field force carried on until the end of January 1919. 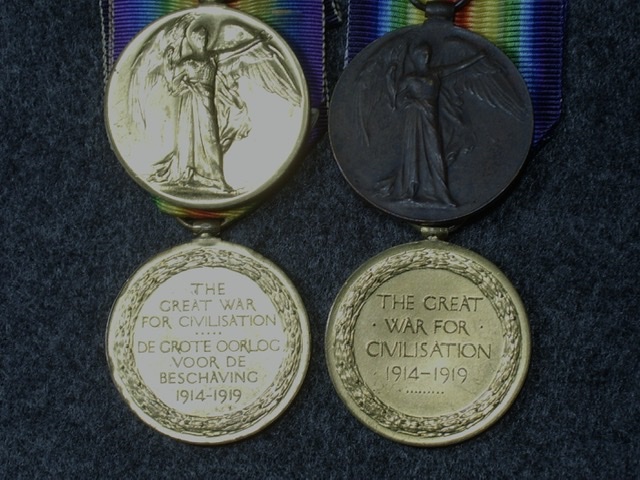 We have in the society collection half a dozen of the allied issues which at present are not on general display. On top of these we hold many of the later British issue which are found widely throughout the museum mainly in groups. To my knowledge and as far as I can remember we do not have an example of an early dull issue. In between the lockdowns I managed to get into the museum and start a re-vamp of the display of medals. A cabinet to the right of the Grundy map once contained lots of medals in envelopes and not on display these have now been removed and ribboned as required and are on display in the new drawers in the lecture room. Labels are still required for these as handwritten tatty scraps of paper are doing the job at present. It is my intent that in the future when we are allowed back into the museum the cabinet under the Grundy map will be cleared out and medals housed elsewhere. This will then give us a cabinet of four compartments dictated by the glass top panels to be used as a special exhibition which can be changed frequently so when the public view the museum there should be new items to look at including the stories of those to who the medals belong. The victory medals will be part of  the first instalment supplemented by some loans. While in lockdown Ian and Sharon have been working hard finding information and research hidden in the society with reference to the medals. So we are on the verge of putting together the stories which have for so long been hidden and dormant. If anyone has an interest in the collection and would like to help I would like some assistance with some of the more mundane chores , labelling, researching and sorting out the collection although not that interesting these tasks do take up loads of time and I am not the best at computer skills and work full time.

Although there are no time limits on the medals side of things and exhibits will be constantly changing around as new information is found, I hope the temporary display cabinet will be in use by the end of the year ready for public viewing in 2022. All this though is subject to covid policy but it does require doing to preserve the stories of our collection for future generations, When I took over as the curator I had no idea of what  information and objects were present to supplement the medals as they have been spread around the museum and not properly catalogued, little by little this is changing. My mission is to tell the story, any recruits out there please contact me then I can sign you up for the duration.