Musings from the Museum 14 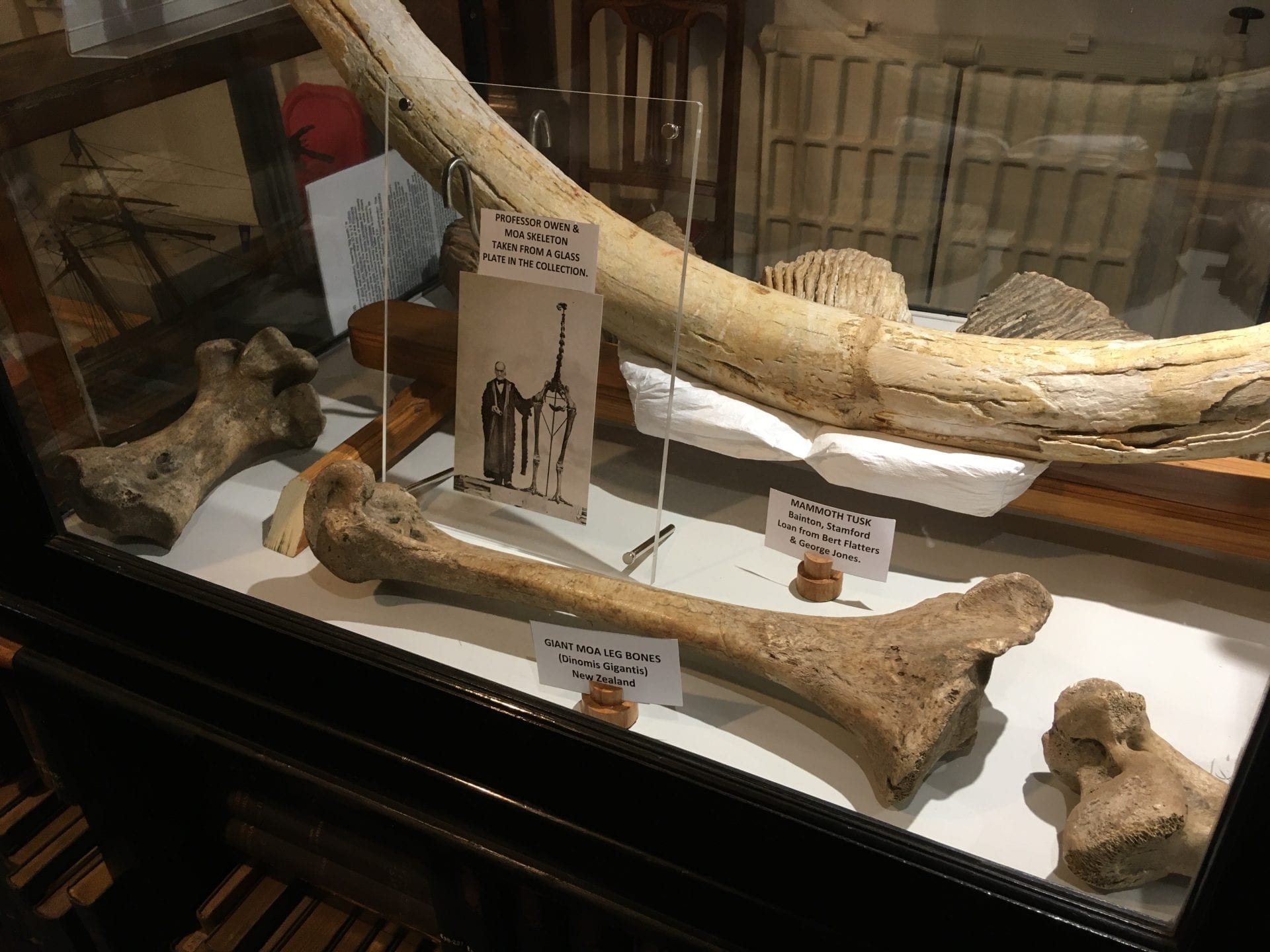 by Richard Buck, Curator of Archaeology

As a child my paternal Grandparents lived in a bungalow along Hawthorn Bank in Spalding. The bungalow, sadly, is no longer there, but I remember visiting my Grandparents in the early 1970’s and meeting their neighbour, a rather pleasant fellow they called Arthur, but who I knew as Mr Bates. I hadn’t thought of Arthur Bates for many years, until it became my pleasure to become a member of the Spalding Gentlemen’s Society and latterly curator of Archaeology, that the name began to crop up again and I decided to investigate, not only for my own satisfaction, but to allow some artefacts in the Archaeology cabinet to gain provenance and discover something about their history.

The Moa bones were the catalyst, and my investigations began.  The Moa was a tall, flightless bird from New Zealand, long considered extinct, its remains being found on both North and South Islands and being one of the society’s more popular exhibits. From information on labels either attached to the bones or displayed nearby, I determined that the artefacts had been presented by Daniel Cross Bates but knew nothing more except the name.

The easiest place to look was on the internet and I must admit to being quite overwhelmed at the information I was able to find. Bates was far more well known in the antipodes than in the country of his birth and is often referred to there as ‘The Weather Man’.

He led a very long and interesting life, being born in Spalding and passing away in Wellington New Zealand. Bates was born on 9 June 1868 to Noah Bates, a farmer of 48 acres from Spalding in Lincolnshire and Louisa Bates (nee Cross) and was eventually one of seven siblings. He was educated at Spalding Grammar School and later Salisbury Cathedral school. By 1890 Bates had decided that he would make a career of the Clergy and entered the College of St Augustine in Canterbury. After ordination as a priest in Newcastle, Bates soon found himself heading towards Australia and by 1893 he was curate of St John, Wagga Wagga.  In late 1893 he married a girl from Sydney, Elise Abigail, with whom he was to spend the rest of his life.

By 1898 he and his wife had settled permanently in New Zealand. From here Bates became an Army Chaplain. He served with the 9th New Zealand Contingent and attained the rank of Chaplain-Colonel. The Boer War proved to be a changing point in Bates life. He contracted Enteric Fever in which one symptom was impaired voice and as a result he was obliged to retire from the church in 1903 as he was no longer able to deliver sermons. On his return to New Zealand his interest in all things meteorological gave him he opportunity to join the staff of the Colonial Museum, in which he was able to assist in helping to sort out a large amounts of climatological work for the Weather Reporting Office, of which he became Director in 1909 until his retirement in 1927. During this he was Director of Meteorology for the Army, specifically concerned with the meteorological requirements of military aviation. On his retirement he was appointed consulting Meteorologist to the New Zealand Government.

Bates probably became re-associated with Spalding sometime between 1919 and 1920.  On 5 July 1919 he and his wife set sail on the Commonwealth and Dominion Line Steamer the SS Port Denison bound for London. He was heading for the Meteorological Conference to be held in Paris, stopping over in England and presumably making his way back to Spalding. When you consider that Europe was at this time engaged in a pandemic of Spanish Flu, it was a very brave thing for him to have done! He left Europe, bound home for New Zealand in January 1920 and the records of the Gentlemen’s Society show that he was made an honorary member in October that same year.

From the Society acceptance books post 1920, Bates becomes a keen donator to the society, including many antipodean artefacts. We do not know if Bates brought anything with him in 1919, intending to donate to the Society, or whether the majority were sent over from New Zealand as gifts after his return.  It is clear however, that the Society forged an important link by making Bates an honorary member.

Daniel Cross Bates was indeed a remarkable man. In later life he helped establish the Wellington Zoo and became the first President of the Numismatic Society.  He was also a fluent speaker of Greek, being interested in the Greek Orthodox Church and its community in New Zealand. From humble beginnings Bates became a very learned and well-travelled man, he had connections with both the Church and the Army, he became known as ‘The Weather Man’ for his interests in Meteorology and he found time to return to his roots and acquaint himself with the Spalding Gentlemen’s Society, the museum of which benefit greatly from his donations and gifts from the other side of the World… I am sure his descendants, including the late Arthur Bates, would be duly proud of their illustrious ancestor and his great achievements.

He passed away on 7th August 1954. In an obituary in ‘The Lincolnshire Free Press’ he was described as being one of the finest students Spalding Grammar School ever had. So next time you browse in the Archaeology cabinet and see the Moa bones, spare a thought for Daniel Cross Bates, a forgotten son of Spalding.