Musings from the Museum 11 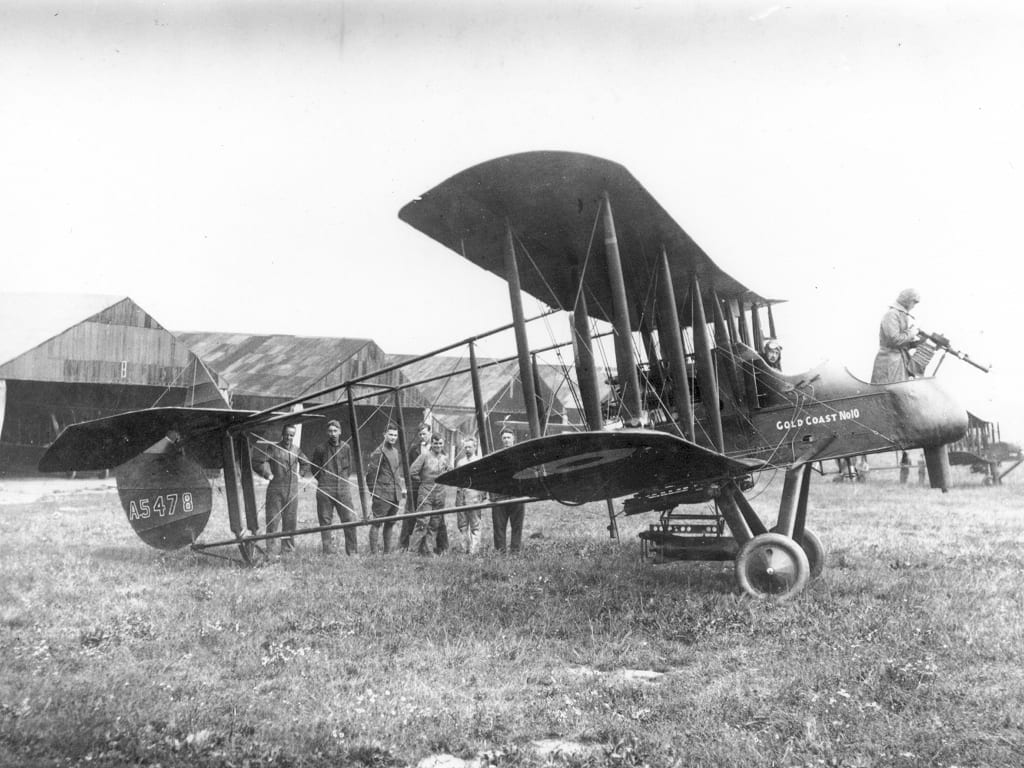 Combat Over the Trenches

Their donor sadly unknown; tucked away among the treasures in our Library are two unique books that, to an aviation historian, are little gems.  These are a pair of Log Books – not of the more familiar, personal, aircrew type – but of two individual aeroplanes that flew during the First World War.  Each book contains the service history of an aeroplane known as the FE2b (Farman Experimental 2, model ‘b’).  Over the Western Front in 1917, these were used for bombing and photo/reconnaissance and even – rather optimistically – as an escort fighter.  The FE2b was the main production model of this two-seat, single-engine, ‘pusher’, aeroplane manufactured by the Royal Aircraft Factory at Farnborough and outsourced to Boulton & Paul; Weir; and Ransome, Sims & Jefferies who between them built about 1,900 b-models.

Due to the high rate of loss in combat or accidents, life-span of these rapidly mass-produced aeroplanes was short enough, but one machine can only be described as ‘a real Friday-afternoon job’, since it gave nothing but trouble every time it flew.  Serial A5472, built by Boulton & Paul in Norwich, was issued to No.11 Squadron in France on 7 January 1917 but saw no combat action.  Various wing components were faulty and replaced and its engine was unreliable.  On 18 March the engine seized up in the air and A5472 was wrecked during the ensuing landing.  After nine weeks service, the RAF gave up on it, packed it in a crate on 28 March and shipped it back to ‘Blighty’ for spares!

The second log book relates to FE2b, serial number A5485, also Boulton & Paul-built. It was what is known as a ‘Presentation Aircraft’.  It had ‘BOMBAY No.1’ painted on the side of the cockpit nacelle and had been ‘bought’ by the gift of money from wealthy citizens of that Indian city.  As an indication of the attrition rate, no less than nine aeroplanes bore that particular name – as each one was written off, its replacement was given its predecessor’s name.  On shipment to France in parts, in a wooden crate, A5485 was assembled and issued to No.23 Squadron based at Baizeau airfield on 15 February 1917.  On 13 March it was flown by pilot, Sgt James Cunniffe and his gunner Airman First Class (AM1) Strong, before Cunniffe was posted away from No.23 to No.11 Squadron.  In action with No.11 on 13 April 1917 he encountered the famous Red Baron (Manfred von Richthofen) flying an Albatros DIII fighter.  Sgt Cunniffe was shot down and wounded but was one of the few Red Baron victims (Cuniffe was his 42nd) to survive and quite coincidentally this Welshman spent two years in Johnson Hospital, Spalding recovering and recuperating from his wounds.

At 2.15pm on 24 March 1917, pilot Sgt Edward Critchley, a twenty-four-year old American from Ohio and his observer/gunner, Airman First Class Frank Russell, aged twenty, took off in A5485 as part of an escort for a group of photo reconnaissance aircraft.  The lumbering FE2b was far from an ideal aeroplane for fighter escort duties and was certainly no match for the nimble German fighters currently opposing them.

That day, it was bad luck that Critchley and Russell should run into the next best air fighter in the German Air Service at that time, Leutnant Werner Voss of Jagdstaffel 2 (Fighter Squadron 2).  Voss was a fighter pilot ‘ace’ with 20 air victories to his name already and his victory tally would climb to 48 before he was killed in action.  Flying an Albatros DIII, Lt Voss swooped at the RAF aeroplane; his gunfire was deadly accurate and his twenty-first victim dived to the ground.  AM1 Russell was killed outright and Sgt Critchley was wounded in the leg but despite his wound, Critchley managed to crash-land the stricken aeroplane behind British lines.

A5485 was damaged beyond repair and the logbook records its demise: “Forced down in combat near Achiet-le-Grand with extensive damage by machine gun fire.  Total time in the air since ‘purchase’: 7hours 45minutes.  Operational flying time: 2hours 0minutes.  It was dismantled, packed in a crate and sent back to England on 28 March 1917.  It had lasted just six weeks at the Front.

Why don’t you have a browse through our Library – you just never know what you might find.