Musings from the Museum 19 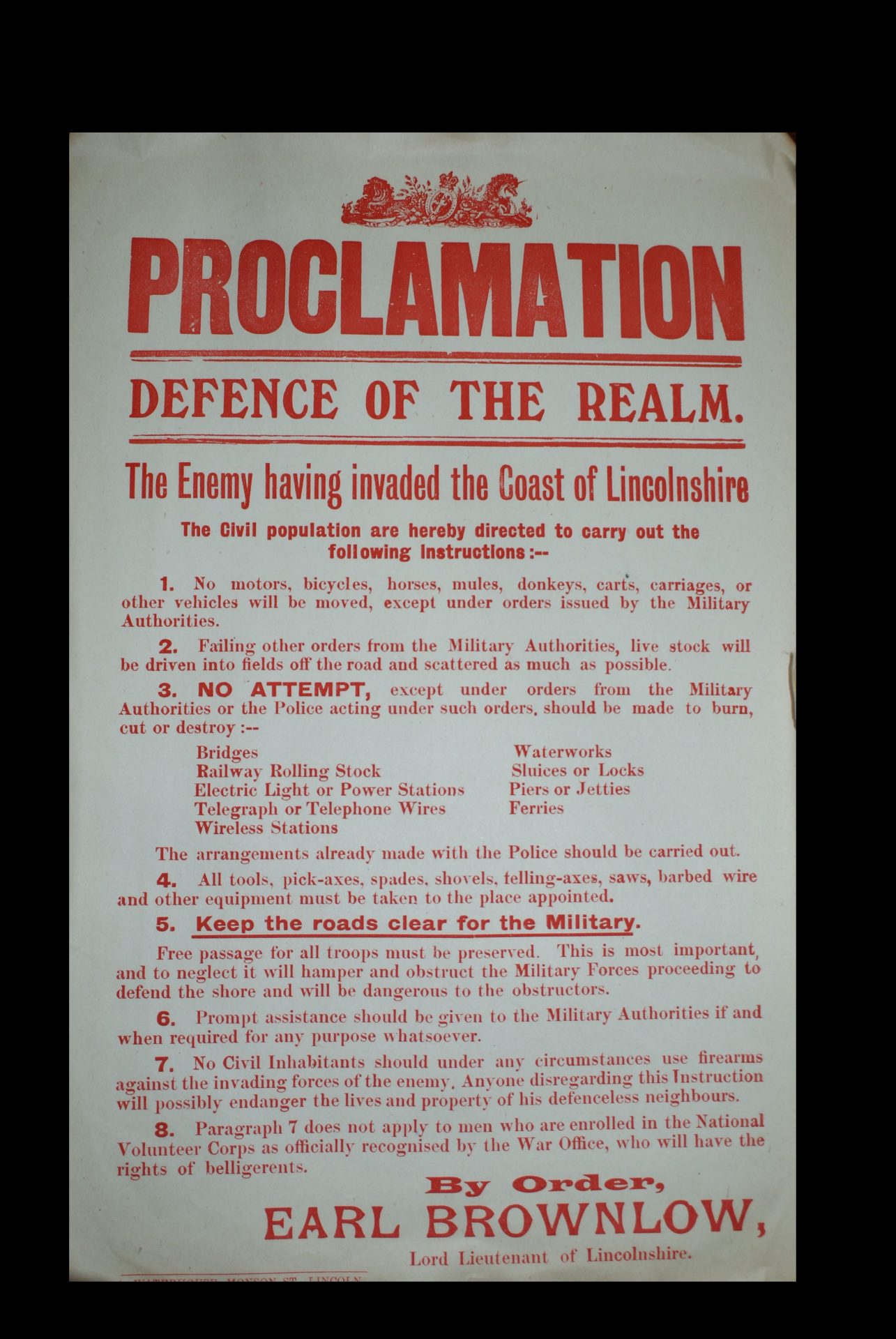 The Enemy having invaded the Coast of Lincolnshire

This poster dates from about 1914 and was obviously never used, but it shows us that the nation feared invasion then, just as in the Second War, and had made preparations.  We have 15 of these unused posters in the collection and 116 pages of documents showing the local plans for dealing with an invasion. Included are the names of all the Committee members and Special Constables, which feature surnames still familiar in the area.

The County Lord Lieutenant was charged with forming a small Central Organising Committee (COC) under the Chief Constable, including an Army officer representing the military.   In Lincolnshire, each Petty Sessions Division formed a Local Emergency Committee (LEC) under the Chairman of the Bench. In turn the LEC organised sub-committees for each District.   All Committee members were sworn in as Special Constables, thus bringing them under control of the Police.  18 sub-committees were formed in South Holland and 112 Special Constables recruited.

These Special Constables lived near road junctions and were to direct traffic, being issued with a map showing the main roads, which were reserved for military use, and the minor roads to be used for civilian traffic.  Each Parish had a defined route for evacuation, all leading towards Leicester.  Other areas of Lincolnshire were to evacuate to Nottingham, via Lincoln & Grantham. This meant that there had to be LECs for inland counties too, to plan for this influx of refugees.

Somewhat naively, the initial official line in 1914 was ‘unauthorised movements should not take place, owing to the risk of the movements of our troops being impeded, and the hardships that fugitives would endure.’  This seems to assume set piece battles between opposing forces rather than hand-to-hand skirmishing in villages & towns, also it ignores widespread publicity about the brutal treatment of the Belgian population, which was bound to cause fear and panic in the face of an invasion.

As well as controlling civilian movements, the LEC had to make plans for impeding the enemy advance.   Horses and carts were to be removed to Sleaford, animals were to be dispersed and driven out onto the fens, tool dumps and labouring gangs arranged for destruction of bridges, piers and barges.  Any transport that could not be moved to be disabled (e.g. by removal of wheels); petrol stocks to be burnt; money & documents removed from banks and Post Offices; Water, Gas and Electric Works to be disabled by their engineers.

Everything was in place by early 1915, culminating in a meeting of LECs at the Guildhall Nottingham to confirm arrangements for refugees.

The flurry of memos from Whitehall seems to ease in 1915 and we have only a few documents from  1916 & 1917.   Then, on 28th March 1918, Major General Hay of Eastern Command writes to the Lincs COC : ‘Reports have reached this office that…the emergency measures, once doubtless completely organised, have either been allowed to lapse, or remain in a very incomplete condition’.  The Germans had launched their Spring Offensive on the Western Front and this had renewed invasion fears.

The LEC plans are brought up-to-date and become more comprehensive.  A sequence of 20 potential alert levels are laid out, with secret telegraphic codes for use between the Military & LECs, e.g. “ALERT DEFAREA” – Hold yourself ready; “BREEZE DEFAREA – The enemy have invaded the coast; with further codes to trigger the various planned measures, culminating in the reassuring  “WARMTH DEFAREA” – Assure civilian population all danger is now over, resume normal conditions.

Official guidance on refugees had changed: ‘It will be impossible to expect the population to remain where a town comes under actual bombardment…it is always possible that a large number of the inhabitants may take to flight though no danger is imminent, and in spite of the advice to remain in their homes.  The inhabitants should be advised to take with them none of their property except their money, sufficient clothing and as much food that they can contrive to carry. A certain quantity of biscuits and cocoa, to provide two meals, has been placed at the disposal of COCs at distributing depots not less than 12 to 15 miles inland’.    Public notices advised – on notification by the Police – ‘IMMEDIATELY start your horses and vehicles on the road to Sleaford.  Bear in mind, and tell your neighbours, that to do this is to save their horses and carts from being seized by FOREIGNERS WHO WILL NEITHER PAY FOR THEM NOR RETURN THEM.  Don’t wait to load your carts, the foreigners won’t touch your furniture.’

This heightened state of alert remained right through 1918. As late as 23rd October, the Chief Constable wrote warning LECs that precautions for home defence ‘were never more necessary than now’.

Following the Armistice there were a number of letters from the authorities thanking all concerned for their work.  Finally, on 22nd Dec 1918, a final meeting of the Spalding LEC was called at the Sessions House and a group photograph was taken.

We have these posters and documents because the Chairman of the Magistrates Bench, and thus Chairman of the LEC was Fitzalan Howard, a member of the Society who, in 1918, became our President and remained so until his death in 1932.  He lived with his wife, 4 children and 4 servants in Holyrood House, a fine mansion next door to Ayscoughfee Hall.  In 1950 Holyrood House was suggested as a new home for the Society but the finance could not be found, so the house was demolished in 1953.  The Society has an album of photographs showing the demolition.