An ‘Instrument of Torture’ 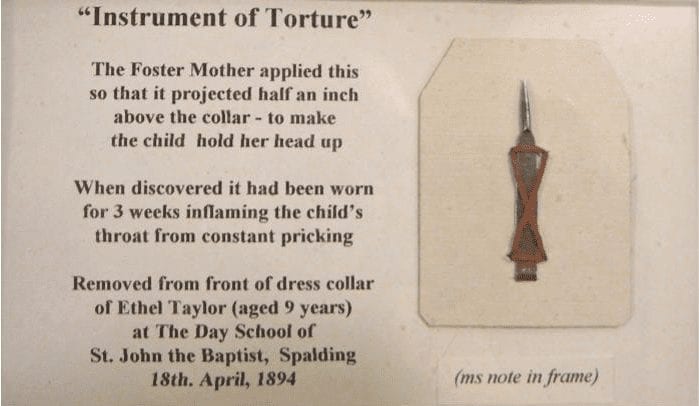 Placed on the top of the Shell Cabinet in the Turner Gallery this small, 150 x 100, frame contains an ‘Instrument of Torture’. The caption tells us where it came from and who had ‘worn’ it on a particular date, but little else. So, who was Ethel Taylor; who were her family. I decided to investigate.

The 1891 Census (taken on the night of 5 April 1891) show Ethel, 6 years of age, living with her mother and older brother at 78 Winsover Road, Spalding. The mother is entered as a ‘Widow’ with the Occupation of ‘Grocer’. The brother is 11 years older and working as a Grocers Assistant. As the mother is 44 years of age in 1891, Ethel is a late arrival into the family. As the mother was a Widow, when had her husband, George Taylor, died? A quick search indicated only one death of a George Taylor in the Spalding area and he had died in 1883 which, if correct, made it impossible for him to be the father. More research needed. Leaving this for the time being, I concentrated searching for further details of Ethel.

The 1901 Census (taken on the night of 31 March 1901) when Ethel was 16 years old, has her far from Spalding as she is now in Greenwich, London working in the household of the General Manager of the P&O Steam Navigation Co. as a ‘Housemaid Domestic’. The house is an elegant Victorian dwelling still occupied today and looks as if it could accommodate the whole of 78 Winsover Road in one room!

By the next decennial census of 1911 (taken on the night of 2 April 1911) Ethel had changed her employer and is now working in Blackheath, London as a Domestic House Parlour maid, her employer being a manufacturer of buckram. At 26 she is still a single woman. As no further Census information is available for some years to come, I had to leave that line of enquiry and look elsewhere.

I next looked to see if I could find a marriage for Ethel. This was something of a daunting task as I only had one name and no idea where a marriage, if there was one, took place. After several attempts I had to abandon the search there being too many ‘possible’ hits.

As mentioned earlier, there was some doubt about the father of Ethel. Her birth certificate has the father as George Taylor yet by the 1891 Census the mother is a ‘Widow’ indicating the father must have died between Ethel’s conception (she was born 6 November 1884) and the Census date i.e. 5 April 1891. So when did George die?

Searching the Registrar General Office Records for a death, the only George Taylor in the Spalding Registration District was in the second quarter of 1883 with an age given as 24. This could not be the person I was looking for as our George would be in his thirties by that time. Turning to another source i.e. The Parish Register for St Mary & St Nicolas, I found what appears to be the same record but with different information viz: George Taylor Buried 23 June 1885 age 39 years. This age fits with ages given in the earlier Censuses and is I believe the husband. So all’s well that ends well (I hope) but, this is by no means certain.

One final comment; the caption states the ‘Foster Mother’ placed the ‘Instrument of Torture’ which begs the question ‘Who was the Foster Mother? Until access to later information is available this question will remain unanswered unless, you have this information.