Armes & Memoires of ffamilies in Lincolnshire 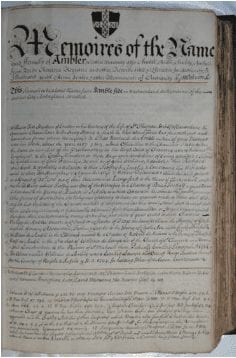 This is an exceptional example of early eighteenth-century antiquarian practice.  The manuscript volume bears a bookplate dated 1735, but was probably begun by Maurice Johnson c. 1720 and continued by him at least until 1747.  It contains genealogical and historical materials relating to the families in his wide circle of antiquarian, professional and social acquaintance.

The folio volume, covered in green vellum tooled and stamped in gold, with a red morocco spine label, binds together 418 leaves of varying size and age. Johnson’s entries include families from Affordby to de la Zouche. Some, such as the entry for Ambler, seem to have been planned and copied out in a more or less finished form, with decorative chapter headings, coats of arms in pen and ink or watercolour, and red guidelines separating genealogical notes from footnote source citations.

Other entries are incomplete. Some, such as that for the family of Stukeley – Johnson was a lifelong friend of the antiquary William Stukeley born in nearby Holbeach – appear to be little more than notes, pasted or bound in, presumably to be returned to at a later date.

Unsurprisingly, Johnson’s own lineage occupies more leaves than any other and contains pedigrees of the various branches of the Johnson family tree. With his own impressive library resources, Johnson’s presentation of the findings of his researches into his own family’s past sheds light on the way in which he carried out his studies. The entry for the earliest Johnson, ‘Eustathius’, is traced to 1048, and marginal notes on the page cite earlier antiquaries whose works Johnson owned – William Camden, William Dugdale, Thomas Maddox, Thomas Gale and Edmund Gibson, to name a few – and manuscripts from the Cotton Library. Evidence for later medieval and early modern Johnsons comes from the Myntling Register, then as now also part of the Spalding Gentleman Society’s collections. The volume also contains eleven loose items, including a letter written by one of Johnson’s ancestors, a genealogical note by one of his descendants, and Victorian and Edwardian additions in a variety of hands.

Armes and Memoires can be said to be a kind of latter-day Myntling Register, as it illustrates the social and cultural history of Spalding and the surrounding area after the dissolution. It complements the Society’s collection of almost 600 letters, many written by Society members named in the volume; and sheds new light on the Society’s original minute books, seventeenth- and eighteenth-century libraries, and manuscript collections. Further, it provides critical context to the thousands of manuscripts related to Lincolnshire’s history and people added to the Society’s collections in the three centuries since its foundation. This rich and idiosyncratic volume is part presentation manuscript, part commonplace book, part repository and part starting point for generations of antiquarian research.