The present museum in Broad Street was opened in 1911. The erection of this building was rendered possible by the generosity of members and a special bi-centenary appeal. The architect was Joseph Boothroyd Corby of Stamford. Additions were made in 1925 and again in 1960. 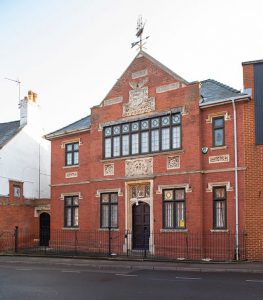 The carved panels on the exterior represent the work of Jules Tuerlinckx of Mailines, a Belgian refugee, resident in Spalding during the First World War. The carvings are from designs made by E.M.M. Smith (1843-1920), the Society’s Honorary Operator (Curator). These panels consist of the arms of the founder over the library window, and above the entrance door a very elaborate carving based on the Society’s book plate. On either side of this are two small panels bearing the monogram “S.G.S.”. The three remaining panels bear the words Art, Literature and Science, indicative of the objects for which the Society was founded. The head carved in the roundel over the front door is that of Edward Gentle (1832-1910), a member who contributed largely towards the cost of the building.

The 18th century sundial on the wall of the caretaker’s residence next door was formerly on the street wall of the Crane Inn in Double Street, Spalding. It was moved from there and erected on its present site in 1913. The weathervane erected on the roof of the museum in 1996 is from the former Ship warehouse in Double Street. It can be seen in the engraving of Spalding High Bridge published by Hilkiah Burgess in 1823.