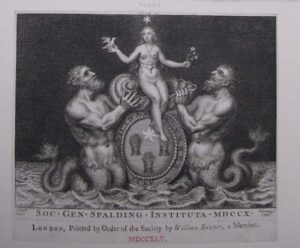 Bookplate of the Society created by George Vertue in 1746

The Spalding Gentlemen’s Society, one of the oldest learned societies in the Kingdom and the earliest provincial association for the encouragement of antiquarianism, was founded by Maurice Johnson (1688-1755), “The Antiquary”, of Ayscoughfee Hall, Spalding.

It began with a series of informal meetings of a few local gentlemen at a coffee-house in the Abbey Yard, Spalding, in 1710 to discuss local antiquities and to read The Tatler, a newly published London periodical. In 1712 it was decided to place these meetings upon a permanent footing and proposals were issued for the establishing of “a Society of Gentlemen, for the supporting of mutual benevolence, and their improvement in the liberal sciences and in polite learning”. In that year formal meetings began with the appointment of officers and the keeping in minutes. The founder, Maurice Johnson, also played a leading part in refounding the Society of Antiquaries of London, and for some years an exchange of minutes took place. Francis, Duke of Buccleuch (1695-1751), Lord of the Manor of Spalding-cum-Membris, became Patron of the Society in 1732.

The history of the foundation of the Society and its development in the 18th century is to be found in Nichols’ Bibliotheca Topographica Britannica, 1790, and also in Nichols’ Literary Anecdotes, vol. vi. 1812. Other histories are by the Revd. William Moore, D.D. (1851), Dr. Marten Perry, G.W. Bailey and S.W.Woodward. In 1981 the Lincoln Record Society published The Minute books of the Spalding Gentlemen’s Society 1712-1755 selected and introduced by Dorothy M. Owen, M.B.E., D.Litt.

Women and the Spalding Gentlemen’s Society

For almost 300 years of its history, the Spalding Gentlemen’s Society was a male preserve, as its name suggests.  From time to time, its rules officially excluded female members, though occasionally the presence of women was permitted.  Times have changed, however, and 2017 celebrates the tenth anniversary of the admission of women as Society members.

Women were not always without background influence, however.  Soon after the Society’s foundation in 1710, one of its main activities was subscribing to buy the latest books, then a very expensive item.  A letter from an early member suggests including ‘the Ladies’ in this subscription scheme.  In 1730, a generous donation of books by Mary Deacon of Peterborough, was recorded.  By 1733, the Society’s founder, Spalding lawyer Maurice Johnson, had plans to include ‘female members’ as he wrote to his friend and fellow-member William Stukeley.  Though this, like others of Johnson’s ambitious plans, came to nothing, the ladies were invited to the Society’s annual anniversary concert, where wine, tea and coffee were offered to them. His wife and daughters assisted with the Society’s collections and with creating illustrations for the minute books.

The more open social atmosphere of England after the Napoleonic Wars influenced the Society; in 1814 its new rules officially allowed lady members, though they were not to vote on Society matters.  This was not to last, and the Victorian Society, reacting against the efforts of the Suffragettes, decided to exclude women again, though they could attend on special occasions as members’ guests. In 1909 they outnumbered the men at a lecture on the French Napoleonic prisoners of war at Norman Cross.

This was still the case when the Society’s splendid new buildings were opened in 1911; the gentlemen had a splendid banquet, while the ladies, who were not present, were thanked for decorating the tables!  The twentieth century saw a much more active background presence by women; in the 1930s a woman, Ivy Barrett, created the library’s card index.  Although a motion to admit women in 1946 was defeated, female researchers were using the Society’s books and papers.  In 1971, five notable female local historians were created Fellows of the Society in acknowledgement of their work, though this still did not confer membership.  Women began to assist the Librarian in the care of the Society’s extensive library.

This was the situation when the twenty-first century began, but pressure for greater openness in organisations soon led to a remarkable opening up of the Society.  More public Open Days were created, proving very popular; the winter lecture programme moved to the Grammar School and was opened to the general public.  Finally, in 2006 a historic vote was taken to admit women as members of the Society.

The first women joined in 2007 and were soon taking an active part in the Society’s activities, becoming officers and helping with the extensive collections in the Museum. Today’s the Spalding Gentlemen’s Society membership is open to everyone aged 18 and over. The broad membership undertake a wide programme of varied activities in lectures and the care of its fascinating museum and archives.  Its early founders would have been pleased to see their forward-looking schemes put into action.